Skip to content
By Jennifer GripeFebruary 13, 2019A Look Back Scrap Wood Projects Shop Upgrade Series Work ShopLeave a Comment on State of the Shop Update #1

Happy 2019, everyone! Yes, I know we’re in February but I haven’t yapped at you all on here since the end of last year.  I thoroughly enjoyed my blogging break in January.  Don’t think I was sitting back, not doing a thing, though!  January was pretty busy for 7MD and there doesn’t appear to be any signs of slowing down.

Before we proceed further, I want to tell you about a new blog series I’ve been thinking over for this year.  I’m going to call it State of the Shop and I’ll just be checking in with you periodically about what I’ve been up to, what builds and projects are coming up, and anything else 7MD related.  Yes, it does sound a lot like my month in review posts.  Those are going away in favor of the new series, which I’m hoping will be more fun for everyone.  Oh, by the way, you’re reading the first one! 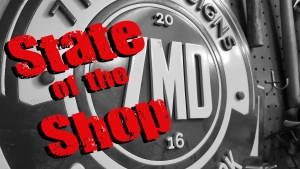 If you follow along on my social media pages, you already know what a change the shop went through last month.  I got so tired of the space being crammed full of junk that didn’t have a home so I finally did something about it. 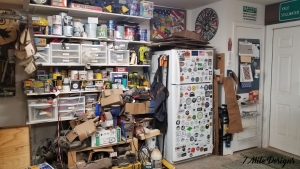 Through many long days, I cleaned, organized, and threw away so much stuff.  I went through my scrap wood mountain and gave six large boxes of wood away. 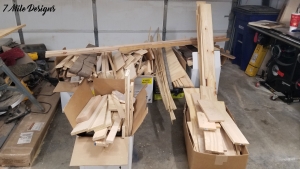 That helped make the biggest impact.  I’m slowly working toward making a home for everything so I don’t get back in the habit of saying “oh, this looks good here” with the intention of moving it later then never moving it.  I sold my big chest freezer that you may have noticed in some of my pictures and built two nesting work bench carts with tons of storage. 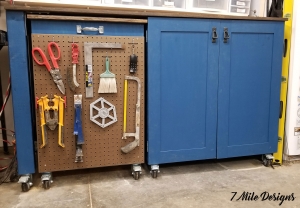 The big cart has drawers capable of holding 42 quart size cans of stain PER DRAWER!  It’s the greatest thing ever. 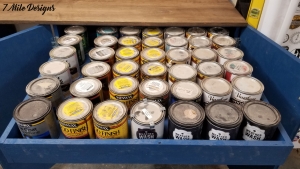 The smaller cart has cubbies specifically designed to hold some of tools that I reach for often and never really had a good home for before. 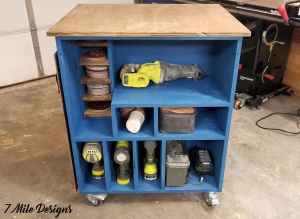 So far, everything has been put back each time it’s been used so I’ll put a tick in the win column.

My most favorite thing to happen in January was the purchase of my new table saw.  Yes, folks, I finally have my hands on a SawStop saw! 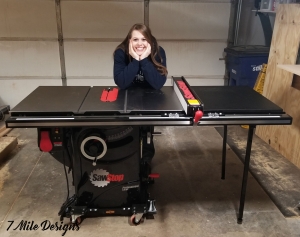 I did a happy dance the whole day I bought it.  Think a mix between the Carlton and the Elaine.  Hey, I never claimed to be a dancer.  Just a builder.  Aside from the capabilities to literally save my fingers should I have an accident, this saw is a work horse.  It cuts like a dream and is so much more accurate and easier to use than my old saw.

I can’t show you all that mess and claim to have cleaned it all up without showing some proof.  Here are the after pictures! 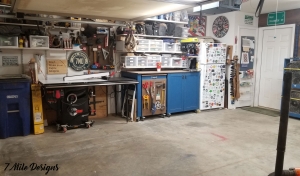 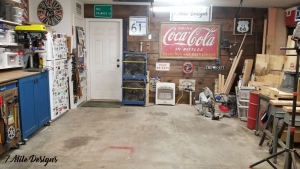 There are still a few shop furniture builds coming this year.  I have had plans made up for a mobile miter saw station for a few months but just haven’t had the time to build it.  That one has been made a priority so I can finish my shop organization mission.  I will also be building a flip top tool cart for my drill press and bandsaw.  It’s going to take some time to properly design it to fit the tools and counter balance them but I’m excited.  I already have one flip top tool cart and I absolutely love it.  These are a great option for small shops to get the most bang for your tool storage buck.

So, what’s coming up? Oy, where do I even begin?  I have started custom order builds back up and am in the process of building a dresser.  I’ve only ever built one dresser before and it was a nightmare.  I mean, the finished product turned out just fine, but I was definitely in over my head at the time.  The same person who ordered the first dresser foolishly ordered this one.  Just kidding.  I’m much better prepared for this build and am actually excited to get to work on it.  I’ve got quite a few builds lined up for the next few months so stay tuned for those.

I’m really excited about what’s coming up next week.  I will be attending the Workbench Conference in Atlanta.  It’s a conference for woodworkers and content creators where we get to learn knew tricks to grow our businesses, test out new tools, and meet up with makers from across North America that we typically only know from online.  This is the second year for this conference but it will be my first time to attend.  Expect a full recap when I get back!

Oh! I almost forgot something.  I actually filmed some videos this month for future YouTube videos!  They’ll be coming out within the next couple months.  I’m going to make this a thing this year.

As you can see, I’m going to be busier than a one-legged man in a butt kicking contest.  This will be the only blog post for a bit because I’ve had some things come up outside of the 7MD world that need a large chunk of my attention.  It’s nothing bad, I promise.  Quite the opposite, really.  I promise to keep the break as short as possible and will be back when I get caught up.  As always, you can follow me on Instagram and Facebook in the meantime to see what I’m up to.